Marieke has had a full career in singing and dancing both in musical productions as well as in bands. She has also worked as a choreographer for several artists and has been a backing vocalist as well. Together with Hans she has worked as a co-producer on many albums and singles and the self-release process has led to building websites herself, doing videoclip editing and more. She now is a full time app designer for her own company and is a self taught individual that firmly believes that owning a company is the way to go. 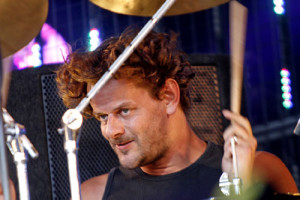 Hans is a well known drummer in the Benelux and beyond and has recorded over 400 albums as a session drummer for many, many artists. He has toured worldwide with Candy and Hans Dulfer and has been the steady drummer for The Voice of holland since 2012. He has done tours with international artists as well, Roger Hodgson, Gino Vannelli, Jimmy Haslip and others. Hans was always involved with production, be it live or in studios and this has made him into the counterpart of Marieke in their own company, Go Independent Records. Once a record company, now a mobile app company for IOS only.